French resistance kills a German officer. As an act of retaliation the Germans decide to kill 150 Frenchmen, the prisoners in the camp in Chateaubriant, but they pass the decision who will be shot down on the French gandarmes that guard the camp.

The film is a story of young man Guy Moquet, who at the age of 17 was arrested by Germans for distributing the communist fliers. He is one of the people who are about to be killed, so he writes his last letter to his parents. Later this letter was saved by a German officer, who was touched by its content.

Film showing the brutal reality of Nazi occupation of France - on one hand we see the ruthlessness of Germans and on the other only illusional power that French resistance actually had. Not a great war movie, but very important to understand how hard it was for the occupied Frenchmen to keep fighting the agressors. 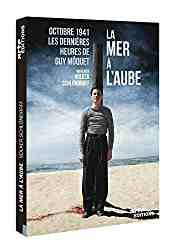 Creators of Calm at Sea

Cast of Calm at Sea

Events depicted in Calm at Sea