Burnt by the Sun 2 war movie

Burnt by the Sun 2 war movie

Burnt by the Sun 2

German invasion of Soviet Union seen from point of view of individuals, not armies.

Second movie telling the life of Sergei Kotov, the Russian division commander during the times of Stalin dictatorship. Whiel first movie was set in 1936 this part shows Kotov in gulag on a verge of Operation Barbarossa. While Germans invade the Soviet Union Kotov escapes from gulag and gets mixed in the fights when Russians try to stop the German offensive.

Interesting plot that shows different scraps of the story from several points of view. We see the Russian army poorly prepared for the war after the purge amongst the officers made by Stalin’s dictatorship in 1930s. Despite the heroism of the individuals the whole defence is doomed. Suprisingly the movie had negative reception in Russia, many people criticizing the incoherent plot and false depiction of Russian soldiers during the German invasion, but looking at it as war movie we can’t agree with those points - wars have many faces and each story has some part of true in it. The story presented by Nikita Mikhalkov is both realistic and entertaining.

Burnt by the Sun 2 full movie 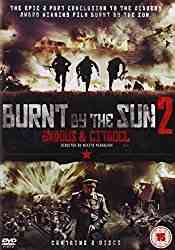 Creators of Burnt by the Sun 2

Cast of Burnt by the Sun 2

Events depicted in Burnt by the Sun 2