The invasion of Sicily is near and small platoon is sent on reconnaissance mission. With help of local partisans they approach the beach, where German machine guns are waiting for them. Caught in ambush most of the Americans die and rest it taken as prisoners. Captain Lyle Lewis, who led the platoon, is interrogated by brutal Gestapo officer. Germans want to get confirmation that Allies will invade Sicily. Lewis was one of the people behind the Operation Mincemeat that was part of the deception to convince Germans that Allies will invade in Greece, so the headquarters are keen to get him back or at least learn what he told Germans. Another platoon of special forces is sent to Sicily to find Lewis, but soon they discover that Germans may have a spy that gives away the informations about their mission.

Low-budget war movie written and directed by Scott Martin, who also played the main character of Lieutenant Allen Wright. The film is hard to describe in few words - on one hand it is kept down-to-earth simple story of small unit that is on rescue mission to Sicily, but at the same time we have really basic errors when it comes to realism. For example we have two girls from Italian resistance that are helping the soldiers - one has large cleavage that exposes her breasts (which is fun, but looks like taken from 1970s B-movies) and the other has strong makeup and looks like she just left the beauty salon. According to the opening titles the movie was produced in cooperaton with prop company, which explains a lot - like the fact that each member of the first platoon wears completely different uniform or why Gestapo officer in the middle of nowhere has clean, freshly pressed and perfectly black uniform.

The movie is getting worse when the fight starts - actually they got right the part that soldiers usually can’t even see the enemy that is hidding in the bushes or behind the walls, but at the same time the American guns have unlimited ammo while German guns don’t seem to work at all. Also the character of Gestapo officer looks like taken out of manga cartoon and his black coat makes him immune to the bullets.

Overall the story itself have some flaws, but was a decent idea (except for the reasons behind Captain Lewis actions which were moronic and the fact that officer vital for intelligence would be sent to a risky mission). Unfortunately the decent idea got lost in the production and the final effect is disappointing - with some more efforts it could have been much better. And of course, since it is American movie, there are historical inaccuracies, like Operation Mincemeat was in fact British operation, not American. 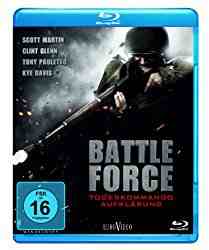 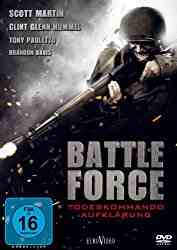