Attack on the Iron Coast

Canadian major is determined to carry out the special operation against German dry dock in St Nazaire. Loosely based on real events.

Canadian Major Jamie Wilson feels disgruntled after his best soldiers died during the disastrous landing on the continental Europe (it is never disclosed, but it is most likely landing in Dieppe). He feels he let down his men and still is bitter about the operation failure. To deal with this trauma he comes up with the daring plan - he wants to attack the only dry dock able to held repairs on German heavy cruisers in St. Nazaire on French coast. But since the resources are limited he plans to use the commandos to secure the main attack, fill old destroyer with explosives and ram it into the gates of the dock. British naval officers are reluctant to approve the plan - it is needlessly risky while the gain will be rather limited. They suspect Wilson’s judgement is somewhat disturbed by the massacre of his men on the beaches in France, but his headstrong attitude finally convinces the Brits and he is given green light to prepare unit that will take part in the attack.

American war movie based on real raid on St. Nazaire dock (also knows as Operation Chariot), but with some serious changes (most probably due to budget limitations), f.e. in real history a destroyer was used, here we have small minesweeper, in real history the explosives were detonated few hours after ramming into the gates, in movie after few minutes. Also if the action shown at the beginning is actually landing in Dieppe, the Operation Chariot took place few months before Dieppe, not after.

Although film is based on important real operation the creators decided to concentrate rather on the making of the decision and the preparation phase, while the action scenes take only small part of the story, which unfortunately makes the film lose its pace and whole thing seems much longer than it really is. 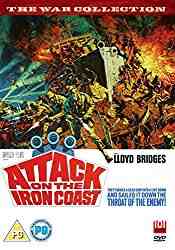 Creators of Attack on the Iron Coast

Cast of Attack on the Iron Coast

Events depicted in Attack on the Iron Coast