The American Civil War was a conflict between the southern and the northern states of United States of America. The conflict aroused around the legislation that abolished the slavery in the northern states. The southern states that were concentrated on agricultural production rather than industrial progress, depended heavily on the slaves workforce and were emphatically against the idea. The political issues soon lead to violence between the supporters of abolition of slavery and their opponents. In 1860, soon after election of Abraham Lincoln to be next president, South Carolina have adopted the act of secession from Federal Union and in next months other southern states have done the same thing. Soon the government of those southern states was elected and despite the Peace Conference of 1861 both sided did not reach any agreement.

Northern states, known as the Union, started with the naval blockade of the revolting states, known as Confederate, aiming to cut off any outside support to them. The Confederate didn’t have much of own industry and were depending on that outside support and the blockade, which led to many attempts to break the blockade. Inland the fights took place mostly in the border states, like Virginia, West Virginia, Maryland, Kentucky, Tennessee. Since the Union had advantage in efficiency of their industry soon they also gained the technological advantage, like in crucial battle of Gettysburg when their rifles proved to be far superior and practically gave them the victory. Union forces were pushing Confederates far and far to the south also using the concept of total war, which means that they were destroying on their way anything that could have been useful to enemy if he would regain the territory.

On April 9, 1865 the Confederates have surrendered, which ended the secession. The war, fought mostly using the same tactics that were used in Napoleonic Wars 50 years earlier (attacks in lines, slow march through the open space, heavy use of artillery), which turned the battles into slaughters. The low accuracy and relatively low power of the of weapons used were causing not much deaths (comparing to other conflicts), but high a lot of wounds. About 3 millions soldiers took part in the conflict on both sides, only 200 000 were killed in action, 350 000 died from the wounds or other causes and over 500 000 were wounded.

Also known as First Manassas Battle (since it was fought near the town of Manassas), it was the first major battle of American Civil War. Just few months after the start of the war Union forces were pushing towards the Confederate capitol city of Richmond, Virginia expecting to quickly finish the rebellion. They meet the opposition near the railway junction near Manassas (just 50 km from Washingto... 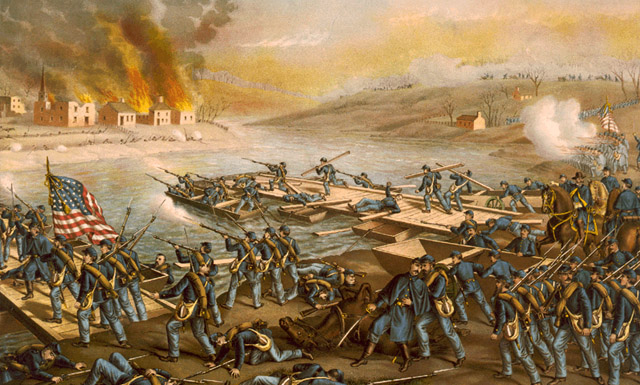 The battle fought in and around Fredericksburg, Virginia. The battle was clash between well prepared defence of Cenfederates and completely senseless frontal attack of the Union forces. Having almost 2:1 advantage in number of forces the Union generals decided to cross the river and make a frontal attack through the town and up the hill where the trenches of the Confederates were well covered by t... 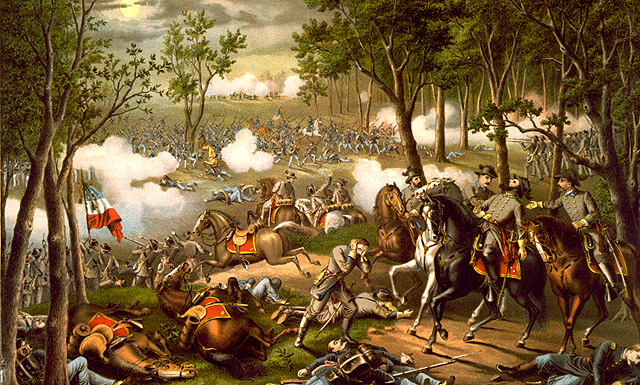 After defeat in Battle of Fredericksburg Union general Hooker prepared a plan to ambush the Confederate general Lee, but Lee prepared a risky plan of pre-emptive strike. He has split his forces and use flanking manoeuvrer to completely surprise the enemy that had 2:1 advantage. The battle ended in Confederate victory and opened the general Lee the road to attack towards Washington, which lead to b... 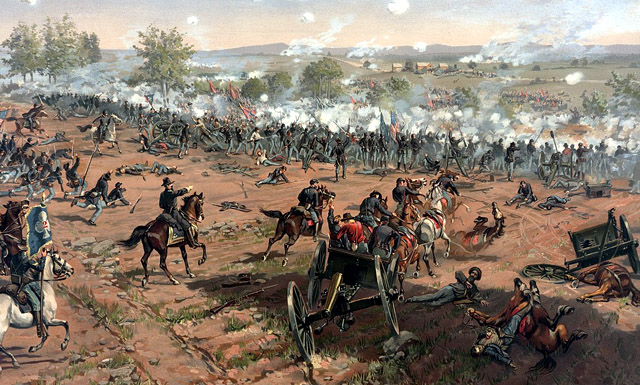 Most famous battle of the American Civil War because of two reasons - it was the battle with highest number of casualties in the entire war and also it was a turning point of the Civil War. Both sides suffered equally high number of casualties, but the retreat of Confederates started the collapse of their whole offensive....